I can’t find a way to fully articulate how thankful I am at your patience in waiting for the soaps to be cured. I feel a bit bad for making you wait–even till now I can’t quite get the hang of making enough soap at a time. :”> Thanks once again, and hang in there!

I happened to listen to this song for the first time a few days ago on iTunes radio, “I Believe”, a duet between Andrea Bocelli and Katherine Jenkins, while I was working in the quiet of the afternoon. It’s a beautiful number that makes me think of how powerful Hope can be. Happy Monday everyone.

I had a sudden influx of orders after this article appeared in Monday’s edition of The Sun Daily. Thanks everyone for your enquiries, kind comments and orders!

This new batch of goats milk and patchouli is a little different from my original recipe. Here are the main things I’ve tweaked:

Will this affect how the soap behaves on your skin (especially if you’ve used this before)? Well, it should be just as good (if not better), given that I’ve bumped up the amount of goats milk in the recipe, and will definitely lather just as well.

For existing fans of goats milk and patchouli, I hope you will like the added scent of the caramelised goats milk that will now accompany the patchouli essential oil. I know how much some of you adore that smell! I’m already taking pre-orders through email up till April 8th when this batch is ready.

Welcome to a fresh new week! Hope you’re doing well. Today I have a bit of a drowsy, dreamy number to share with you so it might be best if you listened to this at the end of the day actually. :p It’s Enrico Rava’s “Lulu”. Enjoy.

A few days ago, when I was feeling pulled in many different directions at the same time, I tweeted this:

“If you find that ur best-laid plans n good intentions are waylaid by having to attend to your kids’ needs, are those ‘reasons’ or ‘excuses’?”

I received a response from my friend, John Kuan of SacredScenery.com, who said,

“That’s a brilliant way of reframing it! I feel better now,” said I.

To which he replied, “Babe – nothing is wasted :)”

Nothing is wasted indeed. What does that mean to you?

(Thanks a bunch for giving me a different perspective, John!)

In case you were wondering:

These 10ml sample sized bottles of Skin Treats oils should be more than enough to help you decide which is the right blend for your skin. The dropper lets you control exactly how much you want to apply (start with just one or two drops first, then work your way up from there if necessary). They make great traveling companions too!

For more detailed descriptions of each of the different types of Skin Treats blends, please visit their respective pages:

To place your order, just tell me which sample you’d like to try in the Message box during the checkout process when you’re done shopping. RM20 gets you one (1) 10ml bottle of Skin Treats. 🙂

Keep in a cool, dry place away from direct sunlight. Use within 1 year of purchase.

This is not a medical product. Always perform a skin patch test, and discontinue use of the product if you notice any adverse reactions.

Before jumping into this crazy soapmaking business full time, I used to lead the customer service and communications department of a local unit trust firm. My official title was “Assistant Manager” although in reality I reported directly to the CEO. (I later learned that I couldn’t have the “Manager” title due to office politics. Haha. I’m guessing I was waaay too young to handle that kind of responsibility.)

My team of brave hearts consisted of 6 young men and women and we were the front-liners for the company. We were the first people to get lambasted by irate customers and it was our job to take care of them and sort them out as quickly as possible. And since we were in charge of communications as well, every start of the month was a chaotic whirl of chasing fund managers for their reports, compiling data, rushing the printer, and occasionally organising the next product launch event. I loved my team and I’d like to think that we worked very well together, and that we were good friends too.

One of my staff was the office despatch boy. He is very soft spoken and really hardworking. I’d get the nicest smile out of him first thing in the morning when I arrive at work.Â I remember when I first started work at the office, he was painfully shy. By the time I had left the company, after several sit-down sessions with him, he was more open and at least I knew what was on his mind.

Today he turned up at my doorstep to personally present to me his wedding invitation. He looked happier and more relaxed than I’d ever seen him. He told me that he was really happy to see me after all this while (I stopped work over 2 years ago). His fianceÃ© wanted to accompany him to visit me this afternoon because he had told her time and again about his ex-boss who was good to him, but he couldn’t bring her along because it was in the middle of rush-hour traffic (he rides a motorbike).

That was pretty much the loveliest thing I’ve heard today. 🙂

I’ve reached a point where I’m more caught up with just continuing production of my staple line of soaps and meeting orders, and have not set aside much time to experiment with new formulations and ingredients. C’est la vie I suppose, but I don’t want to be apathetic about it. So to hold myself accountable, I’m telling you right here that I’m committing to at least one soaping session a week that is dedicated to trying out new recipes, ingredients of techniques over the next four weeks.

What has been motivating me to do this is reading blogs and looking at creations such as these: 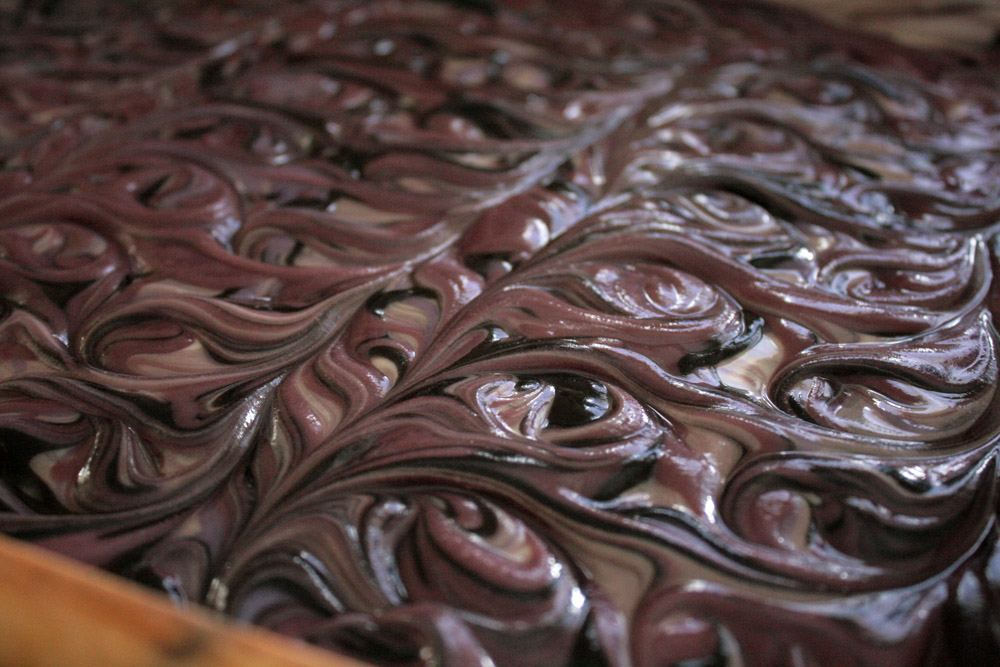 And this one, Vanilla Noir from Inner Earth Soaps in Australia.

There. I’ve said it. If you don’t see any updates here of my adventures with new soaps, bug me on my Facebook page, Twitter, or just drop me an e-mail.