(Warning: LOTS of pictures ahead!)

Last week on the 8th of May (just a day before Malaysia’s 14th General Elections, woohoo!) I finally took the leap to scratch that itch of an idea that has been playing around in my head for the longest time (read: YEARS), which was,

What would happen if I took traditional food recipes and stuck their ingredients into soap bars?

It seemed like a very natural thing to do – given that the food we eat offer a cornucopia of health benefits, even when applied topically to the skin (think: brown sugar scrubs, egg white masks etc).

Of course I wouldn’t touch anything that involved meats… so naturally I started looking at desserts. Specifically, the traditional Malaysian ones, and those which I personally have a fondness for. :”)

The simple rule I gave myself for this little game was to ensure that EVERY ingredient for the food item, was to be used in the soap. I would be referring to food recipe websites a lot!

So for the first experiment, I went with the iconic pulut tai tai, (recipe here) which is a glutinous rice block coloured with butterfly pea / bunga telang (Clitoria terneata) flower infusion, and topped with kaya (a coconut jam, recipe here). This is what the actual dessert looks like. 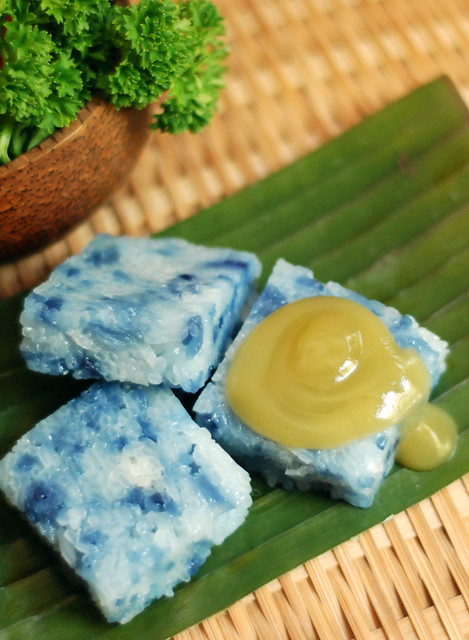 It took me yonks to finally pluck up the courage to plan for, and make this soap. Predominantly because:

But in the end, I talked myself and planned for an uninterrupted day in the studio to “play”. 🙂

For my soap base, I chose to stick to just coconut oil (because coconut plays such a distinct role in this recipe), and used coconut milk for the lye solution. Here’s the rest of my shopping for the ingredients:

YES, there is actual gula melaka (palm sugar) in this soap. AND there are eggs in it too! There is no significant smell to in the resulting soap that hints at the eggs’ presence – but it seems like a great way to introduce protein into a skincare formulation in a relatively safe way. If you’re worried about bacterial contamination, don’t fret – the raw soap’s high pH levels, and the sustained heat it is subject to while cooking, is sufficient to kill off any bacteria in the eggs. Just wash your hands with soap while handling the eggs, as normal.

First up was weighing out all our materials. Here’s our pandan (screwpine) leaf tea, which I made using leaves from my home garden:

And this is bunga telang tea, also from our garden (I had my daughter pick 25 flowers and simmer them in 300ml water. From the earlier soap photos, it is obvious that this isn’t anywhere concentrated enough to be used in the soap as a serious colourant). Isn’t the blue just gorgeous?

And this is something I enjoy seeing, every single time I make soap – rosemary oleoresin lazily sinking to the bottom of a carrier oil mixture (in this case, virgin coconut oil).

Then came making the lye solution – I used coconut milk to replace the water portion. It became a thick slurry immediately. I hadn’t refrigerated the coconut milk, so it turned from pure white into a light caramel colour, as expected. It also gave off a mild scent of ammonia (similar to what happens when using goat’s milk in a lye mixture):

Since this was a hot process (HP) soap which I was going to heat in a slow cooker, I didn’t wait for the lye solution to cool to 40ºC as what we normally do with cold process (CP) soap. After blending the coconut milk lye solution with the coconut oil, I added in the glutinous rice flour, sea salt, followed by more coconut oil and the eggs, which I had blended together:

Now, I wish I had an extra pair of hands because I wanted take a video to show you just how light and surprisingly mobile the whole soap mixture became after the eggs and coconut oil mixture was added to it. The mixture would even slide off cleanly from my spatulas. But eventually it returned to taking on a much more viscous consistency.

After about 30 minutes of cooking at high heat, the soap mixture was at 85ºC at had changed to a familiar, olive green colour:

Doesn’t it look like kaya? 🙂 At this point it was also smelling a little sweet, and reminiscent of food. I tested the pH level, and it had already come down to around 10.

At this point, the general idea was to separate the raw soap into 3 portions:

I separated the “white” and “blue” portions, and coloured the latter by adding the bunga telang tea:

Then I added the pandan tea to the uncoloured portion. Here’s what they look like, side by side:

To say that I was disappointed with the colouring result, is an understatement. I *almost* wanted to give up, but I pushed on anyway. I added more bunga telang tea to the mixture, and worked it in well (my hand was so tired from gripping the spatula!).

Now came the layering in the mold. First up was to randomly drop dollops of the “white” and “blue” soap in the mold, and pack it in:

It was still quite warm, and easy to manipulate. While that was hardening up, I worked with the last remaining soap portion – the kaya topping. In went the crushed gula melaka to the soap that was still being kept warm in the slow cooker:

In about 15 minutes, the room smelled absolutely delicious and the sugar looked like it had melted completely into the soap. I began spooning it onto the “rice” portion:

I smoothed it over as best as I could and covered it with a sheet of waxed paper. Now all I had to do was to wait for it to harden up enough to cut.

While waiting, there was one other question that remained to be answered:

Can you make a blue bunga telang lye solution?

The answer is a resounding NO, because this is the resulting colour when sodium hydroxide (NaOH) flakes are added to bunga telang tea:

It’s a fantastic shade of orange! But when added to coconut oil to turn into soap, the resulting soap bars are still a plain white. Interesting trivia, and I’m glad I finally got round to removing all doubt about the matter. 🙂

Coming back to the pulut tai tai soap – as it turned out, I could cut them within 2 hours of moulding, for two reasons:

So after I had cleaned up all the equipment and work tops, and the soap showed a surface temperature of around 36ºC, I greedily unwrapped the soap:

At this point, I sent a disheartened message to my hubby, saying that I as disappointed with how to blue colouring turned out (or not, rather). And then, I pushed the block through our wire cutters – this is what I saw:

OMG THERE WAS BLUE! Pale, but still unmistakable blue! So with much excitement and anticipation, I cut the rest of the bars.

The soap bars  have a pleasant caramel scent, with a hint of coconut and pandan. Colour-wise, they are unexciting but I have come to appreciate that those stoic shades of grey and olive green. I definitely want to continue experimenting with this blue colourant.

I’ve already been using a bar regularly in the shower, and it is remarkably moisturizing. Works well on the hair too. At this size, each bar weighs around 150g after drying for a week (it was 10g heavier right after cutting).

They aren’t for sale at the moment – but we will be giving some away together with purchases, and to willing guinea pigs (preferably those with extremely dry skin).

So there you have it – our pulut tai tai soap bars. What do you think of this little experiment? 🙂 Would love to hear from you!

Last week I was poking around www.beauty360degrees.com to get some essential oils for my next batch of soap. There was such a variety on offer, it was quite difficult to rein myself in and not get carried away! So I finally settled on 5 bottles. They arrived beautifully and safely packaged on Saturday morning–the start of my excellent purchasing experience with them.

END_OF_DOCUMENT_TOKEN_TO_BE_REPLACED

We have a fresh batch of French Lavender essential oil in stock. Find out how this beautiful scent can also soothe your skin.